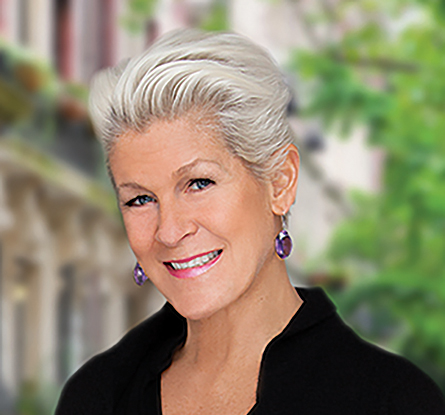 For over three decades, Louise Phillips Forbes has been an industry leader in New York City’s residential real estate market. With career sales to exceed $5 billion in 2022, she is considered one of the elite Power Brokers in Manhattan. Louise was named Residential Agent of the Year by REBNY (the Real Estate Board of New York) in 2020 for her consistent achievements and leadership within the industry. A multi-time winner of Halstead Real Estate’s (now Brown Harris Stevens) esteemed Broker-of-the-Year award, Louise has also been acknowledged many times as the #1 listing broker companywide and currently leads one of the firm’s top sales teams. Louise and her team were recognized as the #1 East Side Office team and the #4 team companywide in 2021. She has developed a significant following among developers, buyers, and sellers throughout Manhattan. From the Upper West Side and Upper East Side to the West Village, Tribeca, and Wall Street, Louise proudly serves prominent New Yorkers.

Louise’s experience in both luxury residential sales and development projects—over 30 to date—has equipped her with the unique ability to fully understand clients’ needs, navigate fluctuations in the market, and negotiate complicated deals ranging from $700k to tens of millions of dollars. Recognized as a highly dependable advocate for her clients, Louise has built strong relationships and is known for her market insight, careful guidance, passion, and professionalism. She considers herself more of an educator than a salesperson.

Most recently, REAL Trends named Louise as one of “America’s Best Real Estate Agents,” their greatly esteemed ranking report, and they consistently list her among their annual “Real Estate Top 250,” which recognizes top real estate brokers and teams throughout the country. Louise has also been included in Avenue Magazine’s annual “Influential Women of New York” edition and has been featured in cover stories for House New York and Mann Report Residential magazines. Additionally, she is frequently quoted in real estate articles for The New York Times, The Real Deal, Real Estate Weekly, and many other notable publications and blogs. Louise has also appeared on regional TV shows nationwide to comment on local real estate issues while representing the national real estate perspective. Louise is a guest lecturer for the Real Estate Board of New York (REBNY) and has been a panelist for the Asian American Real Estate Association’s East Meets West Luxury Real Estate conference, the Real Estate Top 100 Mastermind Summit, and the annual Inman News Conference in New York. Likewise, she has been a regular contributor to Vince Rocco’s “Good Morning New York,” America’s No. 1 online real estate radio show.

A resident of the Upper West Side, Louise first came to New York in 1987 from her hometown of Nashville, TN to pursue a career in dance. She knew she had found home and is now balancing work and family as a wife and busy mother of two sons, both of whom play hockey.

An enthusiastic supporter of the arts, Louise is an active board member for Change for Kids, a non-profit that provides cultural arts programs for inner-city elementary schools, enriching children’s educational experience and path to success. Her years of passionate service captured the attention of Melanie Grayce West, who featured Louise in her prestigious WSJ column, “Donor of the Day.” Furthermore, she is honored to sit on the advisory board for The Bronx Museum of the Arts, as well as Art in General’s Commissioner’s Circle, which provides in-depth support to emerging artists for production of new works. In the past, Louise served on the advisory committee for Habitat for Humanity.

When she is not racing around the busy streets of Manhattan negotiating deals, you will find Louise spinning at her local SoulCycle—where she gets her groove on to the beats of celebrity instructors (and friends) like Stacey Griffith—or surfing in Montauk with her family.